The TOMAHAWK is no small board to review. It is one of the best selling gaming motherboard on the market, and the Z690 chipset comes with an unprecedented amount of tech goodies, including the brand new PCIe 5.0 standard to name only one.

It’s design and aesthetics, as in the entire MAG series, remains around an assumed military feel.
This year TOMAHAWK shows-off (very well) MSI’s new manufacturing line, and its higher finish quality. We have a more precise-cut components, with intricated drawings in brush finish.

It definitely accentuates the overall premium feel of the MAG Z690 TOMAAHWK D4.

We are dealing with a 6 layered PCB ATX motherboard. Totally expected from a PCIe 4.0 enabled motherboard. Having more PCB layers (typically only 4) adds PCIe signal isolation which will allow a stable PCIe 4.0 and PCIe 5.0 support.

It also benefits VRM heat dissipation and audio quality. Obviously, a solid foundation for a performant and durable motherboard.

The LGA 1700 CPU socket features 500 more pins than its LGA1200 predecessor. This is a sizable jump made a necessity by: 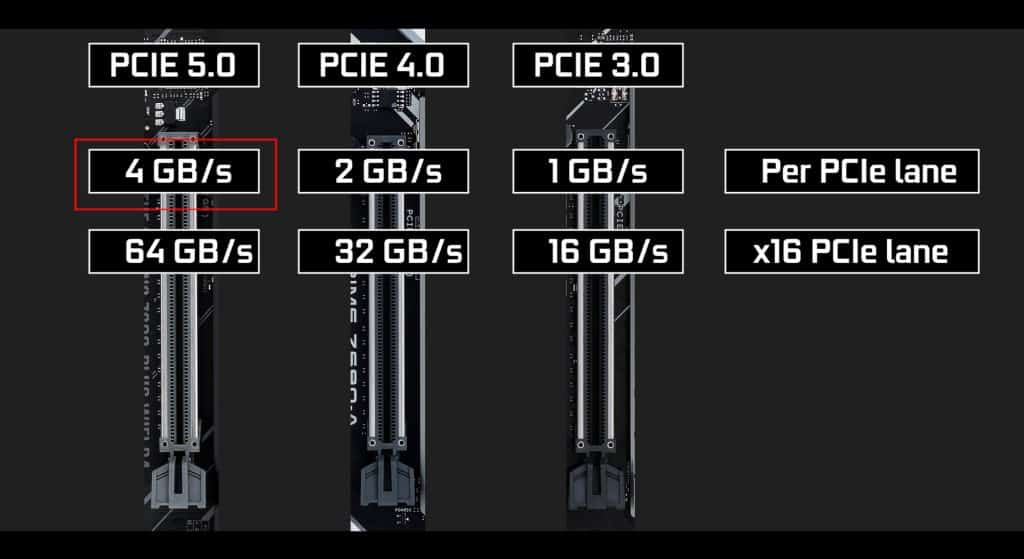 The PCIe 5.0 standard doubles its previous PCIe 4.0 bandwidth, going from 2 GB/s per PCIe lane, to 4 GB/s per PCIe lane.
This evolution brought in by Intel surprised the industry since there is no components, currently, which can use this new standard. Graphics Cards are still struggling to go beyond PCIe 3.0 level bandwidth and we do not have PCIe 5.0 enabled M.2 SSD. That last one being predominantly produced in PCIe 3.0 standard as well.

Therefore, the introduction of this new standard is more a marketing stunt than a selling argument. It does, however, make the Z690 line-up especially future proof since this standard should be around at least until 2025.

This thing is insane! 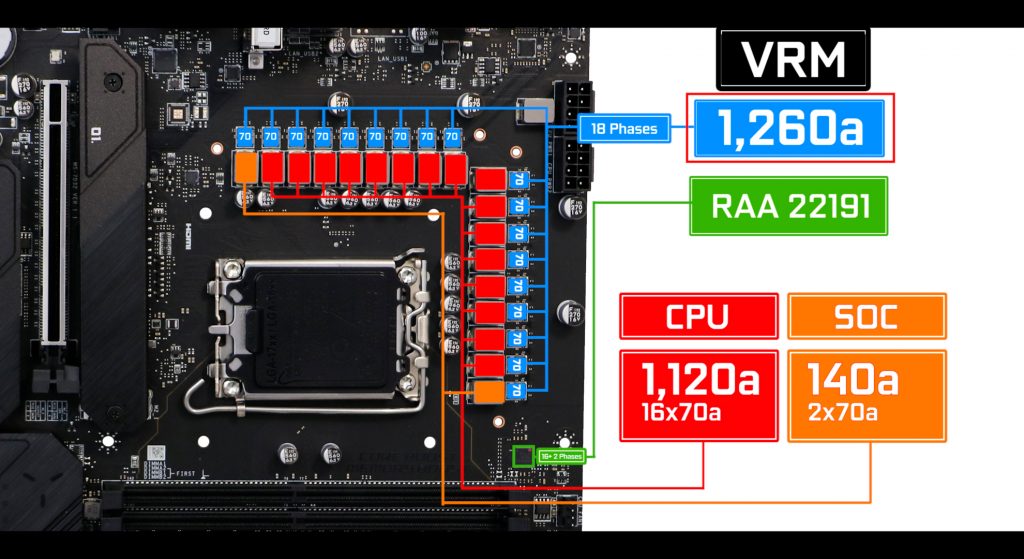 It has nothing to do with its predecessors, and truly is an impressive leap forward.
We have 16 70 AMPS CPU-centric powers stages, and two 70 AMPS SOC power stages, for a grand total of 1,260 AMPS.

That’s a whooping 1,120 AMPS worth of juice to power our processor. Obviously more, much more than you would ever need to power even the most over-clocked Intel processor of the Alder Lake line-up

Worth noting, this is the exact same VRM configuration available on its sibling, the MAG Z690 TORPEDO. 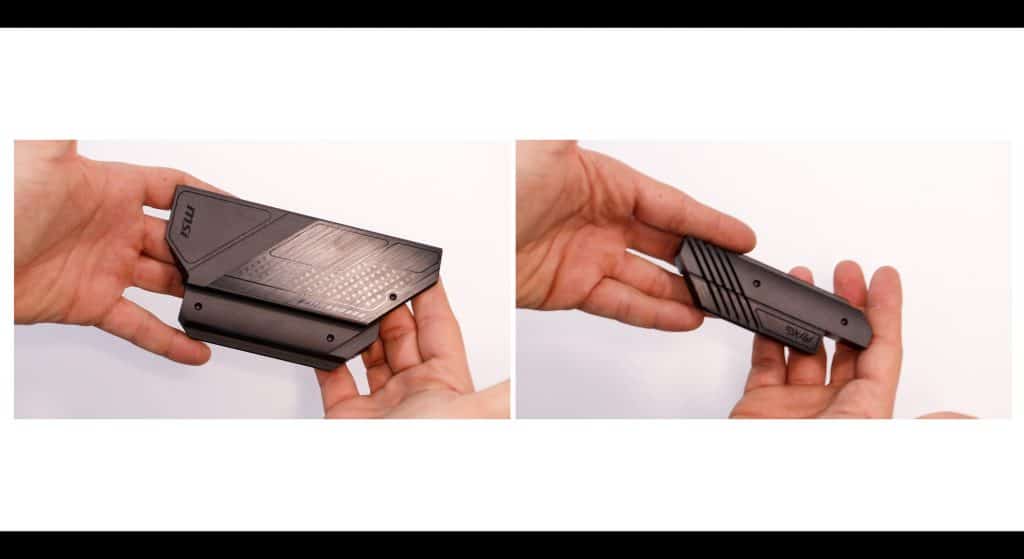 We have two good quality, thick and dense heat-sinks to keep our VRM as cool as possible. 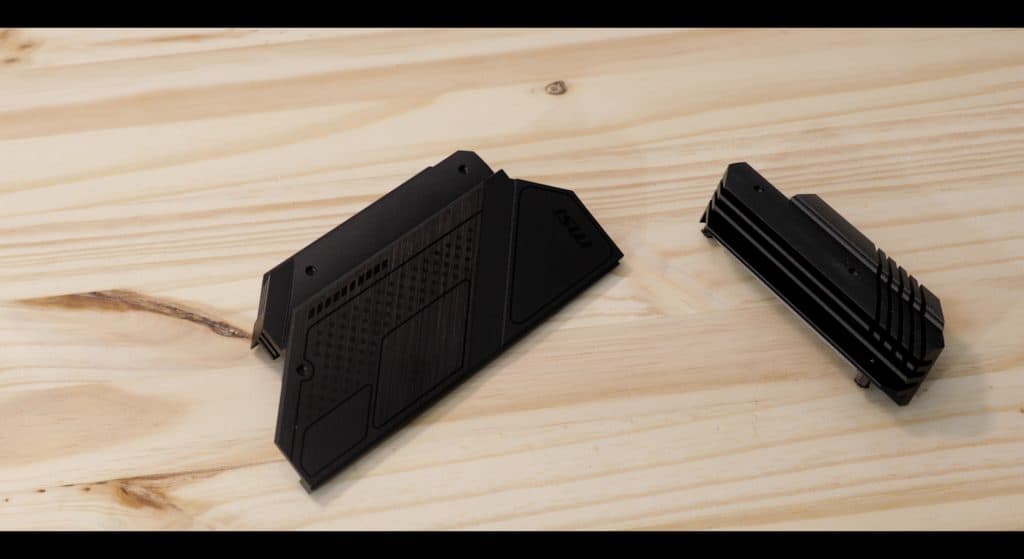 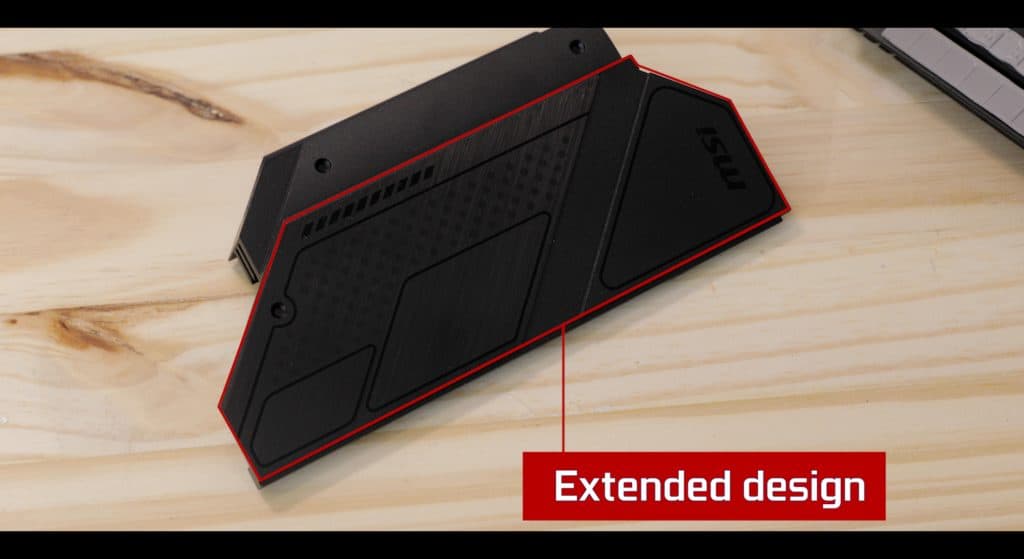 It shows impressively wide walls which will help conducting more heat towards the radiating roof.

But I specially like the fact that the entire IO roof is in fact made of aluminum and provides an extended radiating solution to this muscled-up VRM! 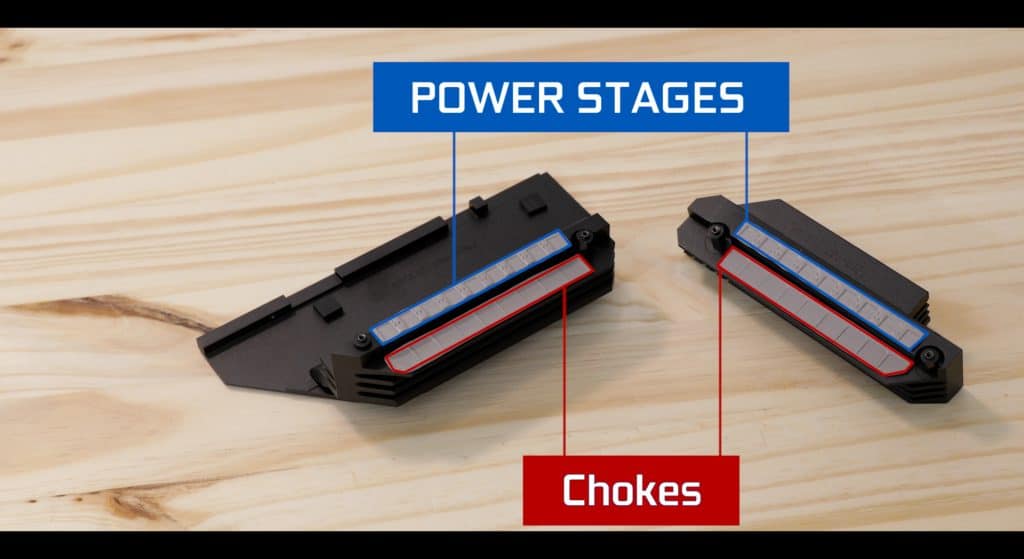 Finally, I want to note the double-contact design introduced by ASUS on B550 powered motherboards and now adopted by MSI.
Both chokes and power stages have a thermo-padded contact to the heat-sinks, allowing a higher heat dissipation ratio.
A simple, inexpensive, but effective solution!

Despite having a larger-than-life VRM, the TOMAHAWK does a sterling job at keeping its heat foot-print well below any thermal throttling limits. 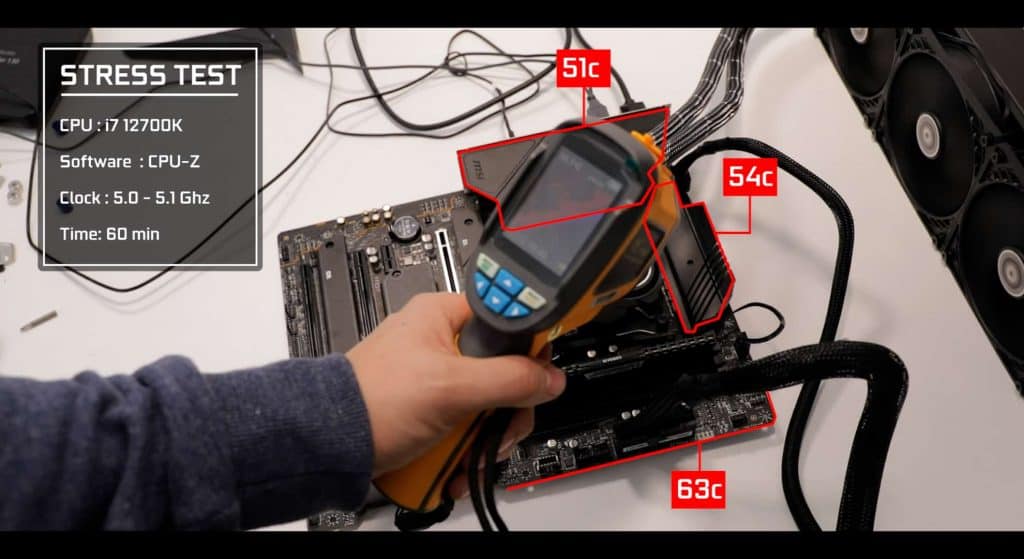 Both VRM blocks stayed below a chilled 55c, and the PCB managed to keep under 65c despite a rather torturous synthetic stress.

In short.  The TOMAHAWK shows all the hallmark of what should be long life-span motherboard.

Z690 powered motherboards come in 2 flavors. They wither support DDR4 RAM, or DDR5. In our case, the MAG Z690 TOMAHAWK D4 can support up to 128 GB of DDR4 ram in a dual channel configuration. It is overclockable up to a novel 5,2 GHz ( in a single DIMM configuration ) which is noticeably more than its Z590 predecessor (200 MHz more).

The question is why did MSI release a DDR4 version of this motherboard (there is a DDR5 version) ?
1- DDR5 availability is scarce at best, and prices largely inflated.
2- DDR4 allows a cheaper upgrade for existing builds
3- The performance differential between DDR4 and DDR5 RAM, in a gaming context, is minimal at best.

So not only do I understand the move to keep DDR4 RAM around but I agree with it! Obviously an significant jump for Intel power motherboards which could only support 1 PCIe 4.0 M.2 SSD module (at best) if coupled with the right CPU. 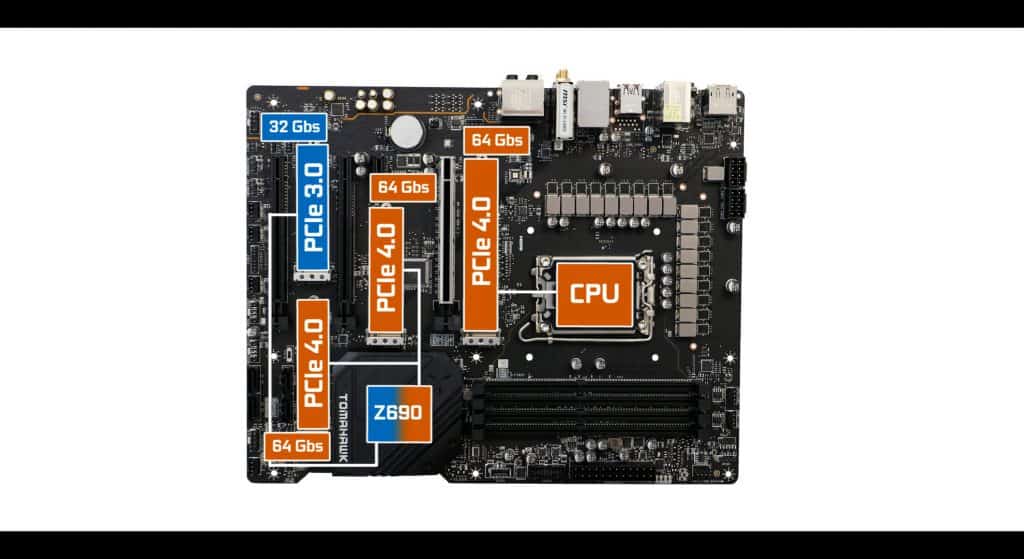 Our 3 PCIe 4.0 enabled M.2 SSDs can swap data up to 64 Gbps, which will have a direct impact on your day-to-day computing, and noticeably out perform AMD (X570 powered) motherboards.

Obviously this will produce quite a bit of heat. 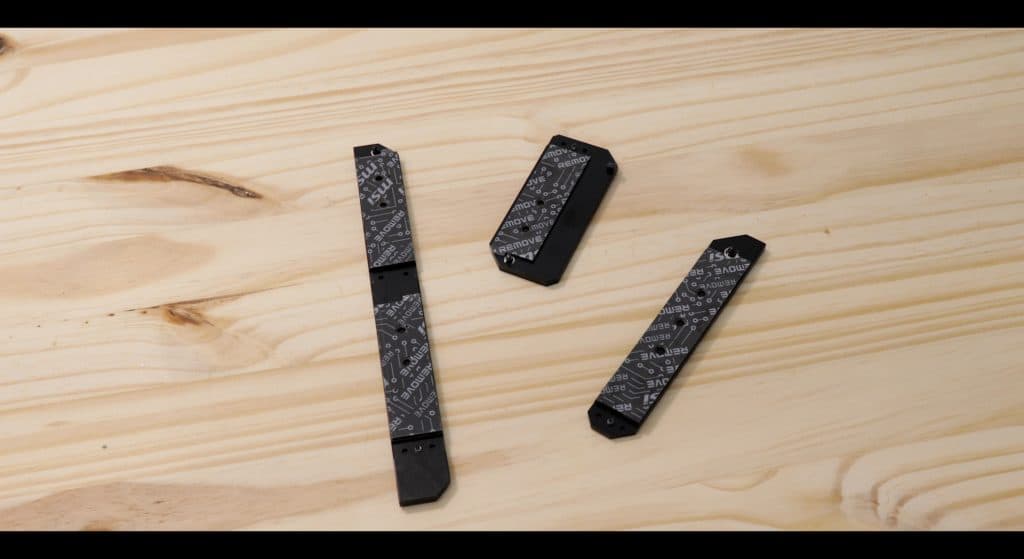 Obviously, more than enough to keep your PCIe 4.0 enable stick away from ever thermo-throttling. Introduced by its concurrent, the TUF Gaming Z590-PLUS, MSI came up with its own version of a M.2 SSD locking mechanism is something I absolutely love!
Tool-less, screw-less, this thing will simplify your assembling life!

Intel’s long-awaited Z690 chipset is its first to natively support PCIe 4.0 standards. Of its 28 PCIe lanes, 12 of them are PCIe 4.0 which has for consequence an immediate bandwidth jump, not only for M.2 SSDs but also for the back-IO which shows dramatic bandwidth upgrades compared to its predecessor Maybe even more impressive, Intel succeeds where AMD failed, and shows a surprisingly low wattage for its Z690 chipset, allowing it to be cooled by a modest heat-sink. Something which will positively impact manufacturing cost, and hence, your wallet.

In contrast AMD’s X570 chipset features a boilling11 watts forcing most of its motherboards to be cooled with a fan, adding moving parts, noise as well as a significant cost bump.

For a more classical storage solutions, we have our usual SATA 3.0 plugs. 6 in total, with a transfer rate of 6 Gbps each. They can be configured to run into a 0,1, 5 or 10 RAID configuration. But our first PCIe 16 slot (closest one to the CPU) can output PCIe 5.0 bandwidth at 4 GB/s per lane, for an impressive total of 64 GB/s.

Worth noting that, with the current bandwidth outputs of AMD or Nvidia graphics cards, there are no performance gains between PCIe 3 or PCIe 4 or even PCIe 5 standards.
It is great for future proofing (and marketing), but that’s about it . We have 7 nested PWM FAN connectors, 1 of which can support a water pump (AIO or dedicated).

Definitely what you want to see on an enthusiast driven board. It can handle about any cooling solutions you will throw at it. Spanning from the classic air to the eccentric dual-loop custom water cooling apparatus. The EZ debugger is really the a must-have on PCIe 4.0 / PCIe 5.0 enabled boards. More often than not, enthusiasts can’t resist the call to find their RAM or CPU overclocking limits, and fail boots becomes a daily incidence.

Has seen primarily on its more expensive UNIFY sibling, the TOMAHAWK shows a very sober, led-less suit. No embedded or hidden RGB, Just a very sober dark look, which does accentuate the overall military feel of the build But for the ones who really can’t live a day without their shiny toys, we also have 4 RGB connectors : All of the above are obviously fully customizable (and sync-able) though MSI’s proprietary Mystic software.

The MSI MAG Z690 TOMAHWAK D4 will cost you about 250 USD, that’s about 50 bucks more than its predecessor.. that’s quiet the jump, but there are some strong arguments for it.

First and foremost, this year TOMAHAWK departs the mid-range gaming market segment to the upper tier one. The VRM has nothing to do with mid budget gaming motherboard. This thing is absolutely unrealistic.. in a good way.

We also have faster PCIe 4.0 storage solution, and a future proofed PCIe 5.0 GPU slot. This is an extremely well balanced and dare I say well priced product!

It’s also deliciously well finished and, thanks to its DDR4 retained RAM, ease the upgrade effort for our gamers out there.

And for once it does bring quite a bit more than its cheaper B660 version which is not always the case.

The competition should really start to worry, cause the Z690 TOMAHAWK shows-off MSI at its very best!

In short if you are on the market for 1500 euros well rounded gaming rig, the Z690 Tomahawk is where your money wants to be!