MSI’s MPG series is all about performances, and the GAMING edge is its most sold model.
It’s meant to bring you the best possible gaming centric performances to a market’s bottom dollar. 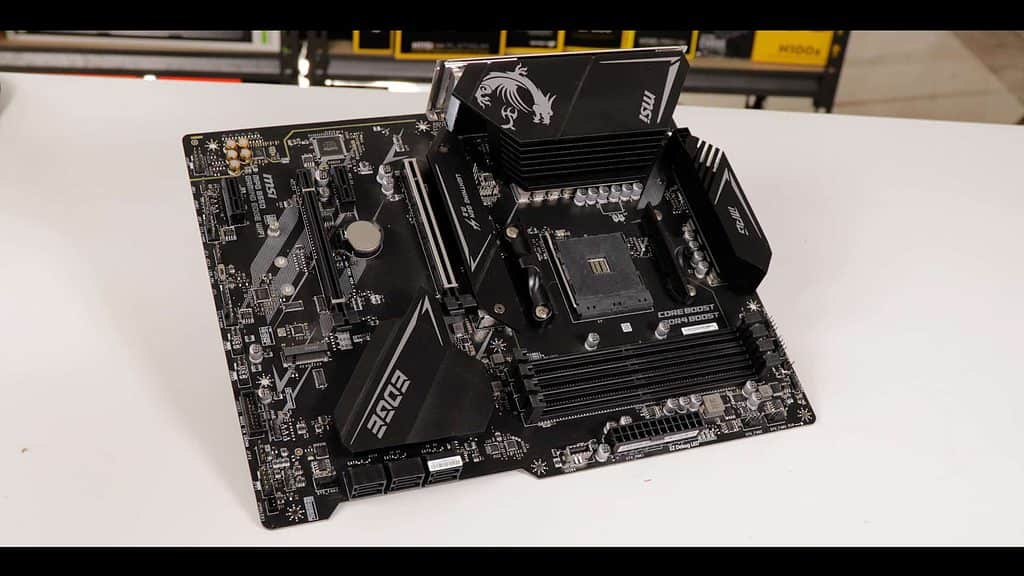 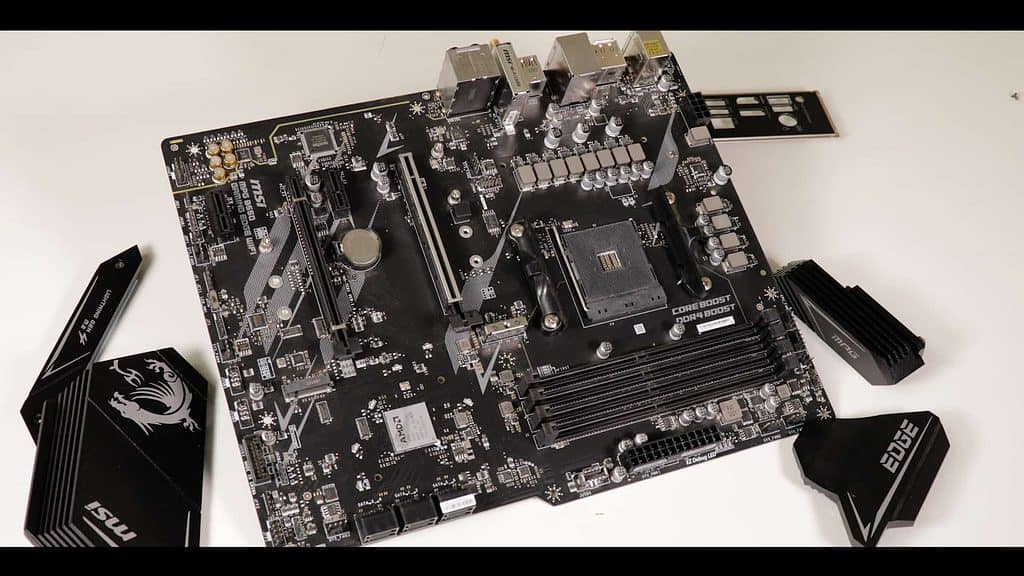 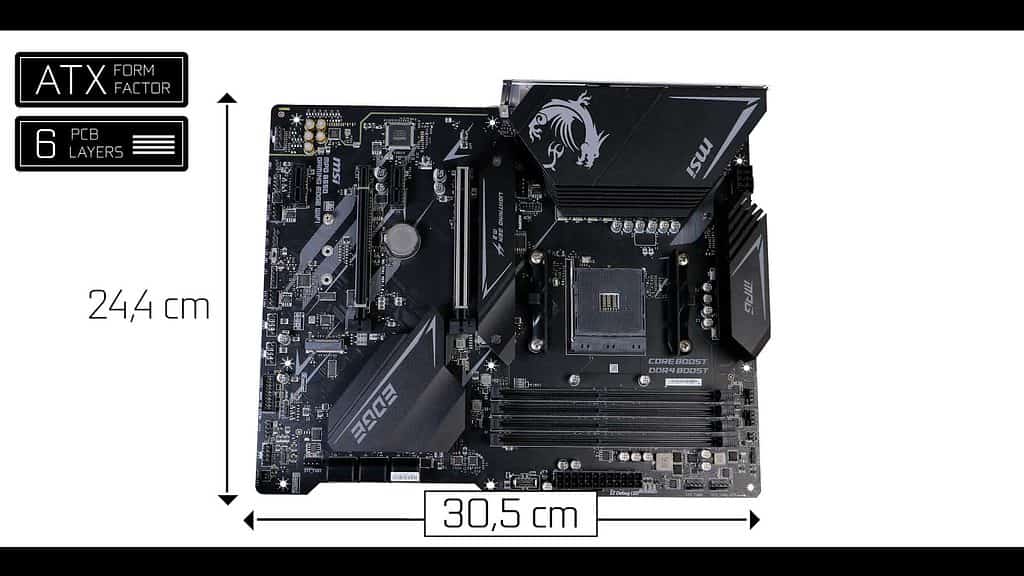 We are dealing with a 6 layered PCB ATX motherboard. A significant upgrade when compared to its predecessor, the MPG X570 Gaming EDGE 4 layers, and an added signal isolation which will allow a stable PCIe 4.0 support. 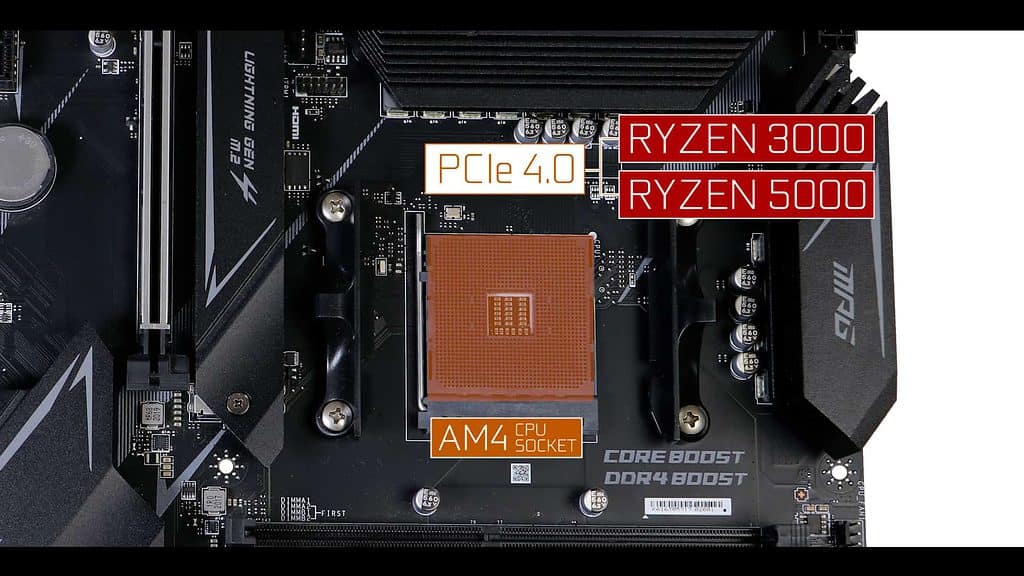 Note that Ryzen 3000G series are not compatible with this board! 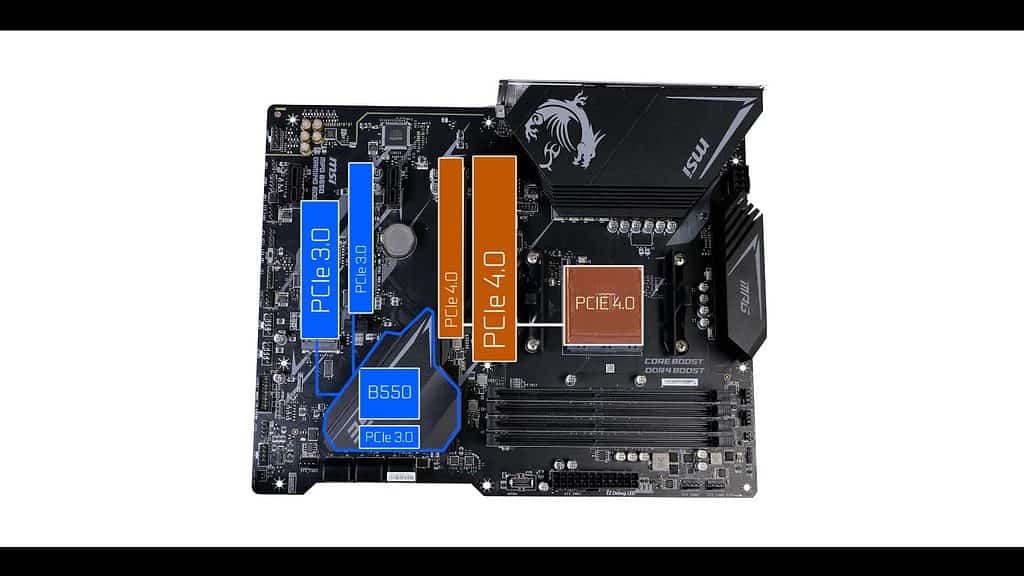 This is where MSI really did well! 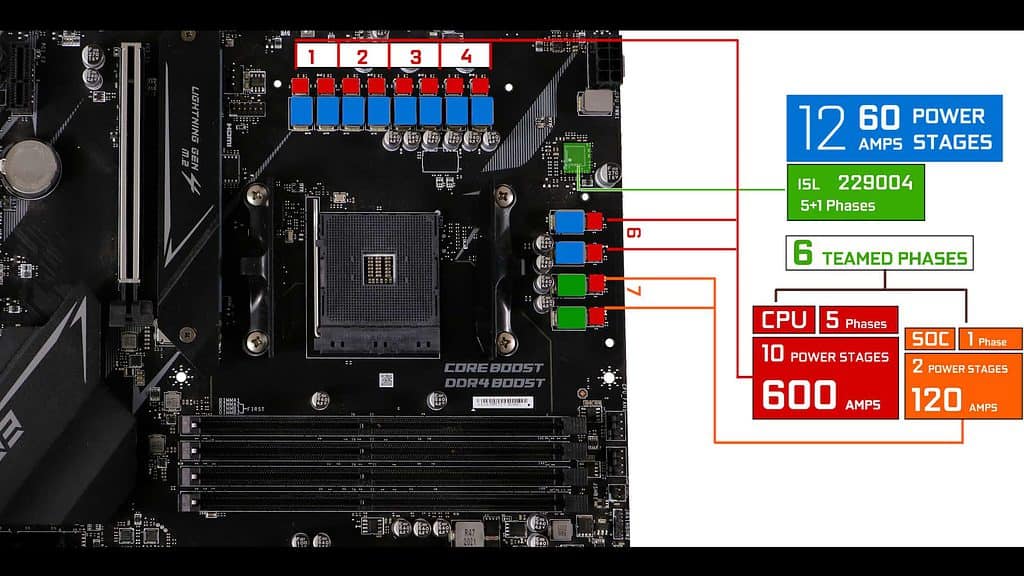 It is exactly the same VRM you will find on the MAG B550 TOMAHAWK.

We are dealing with 12 60 amps Powers stages, 10 of which are CPU centric.

They are paired into 6 parallel phases, delivering a whooping 600 AMPs to our CPU.
Obviously more than you’ll ever need to run and severely overclock any processors featured in the Ryzen 3000 and 5000 series. 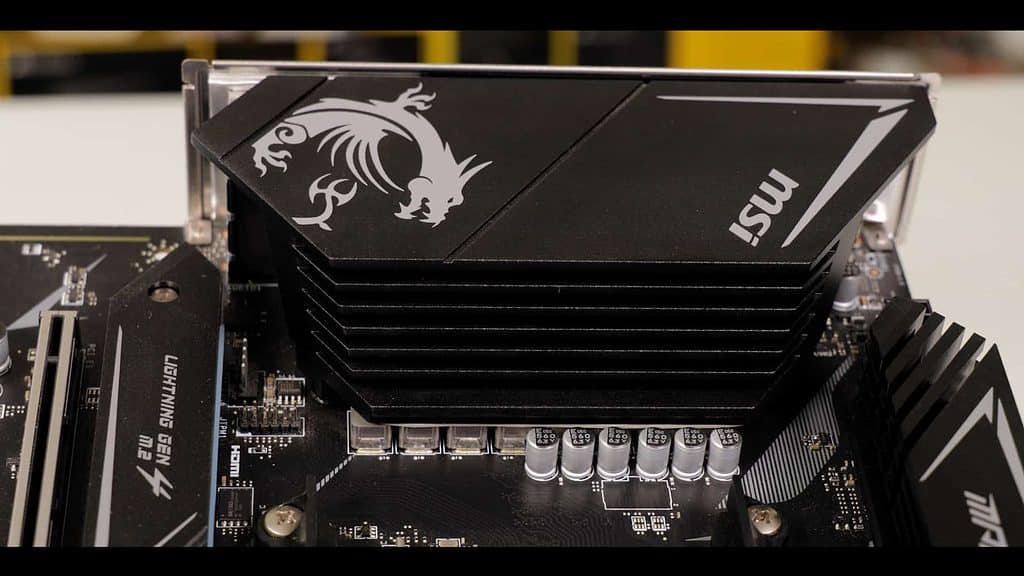 Secondly, we have these imposing VRM heat-sinks, which do an amazing job at radiating all that excess heat away. 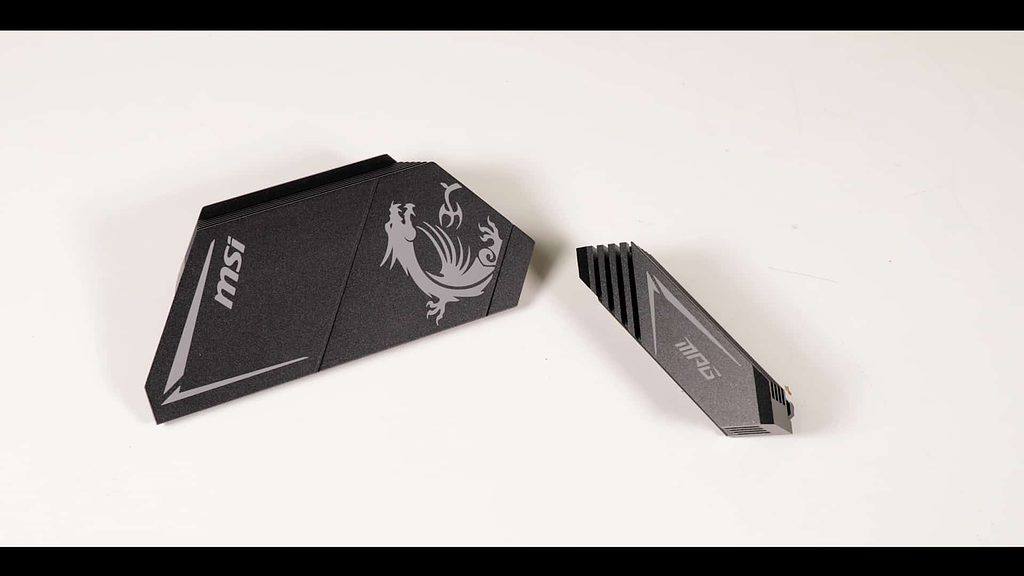 Worth noting, the double contact thermo-padded design which improves its heat-sink heat diffusion ratio quite a bit. Absolutely great for this motherboard in term of stability and durability.

The MPG B550 GAMING EDGE WiFi can support up to 128 GB of DDR4 ram in a dual channel configuration. It is  overclockable up to a whooping 5,1 GHz, which is noticeably more than its X570 equivalent.

Note: these kind of clocks (5,000 – 5,100 MHz) can be obtained with single memory sticks, The more RAM module installed, the lower the clock goes.

With a fully populated dual-channel, the maximal frequency obtainable should be anywhere between 3,600 MHz and 4,000 MHz. 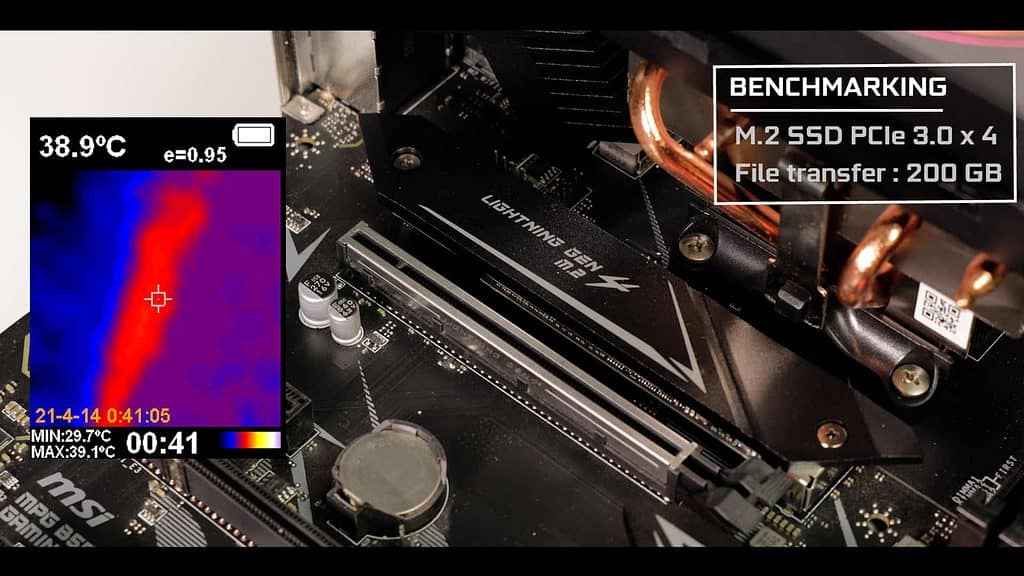 Fortunately , we do have a rather impressive thermo-padded (0,5 mm thick) heat-shields  which do a wonderful job at keeping our stick cool in any usage condition. Perfect for a bootable M.2 SSD. 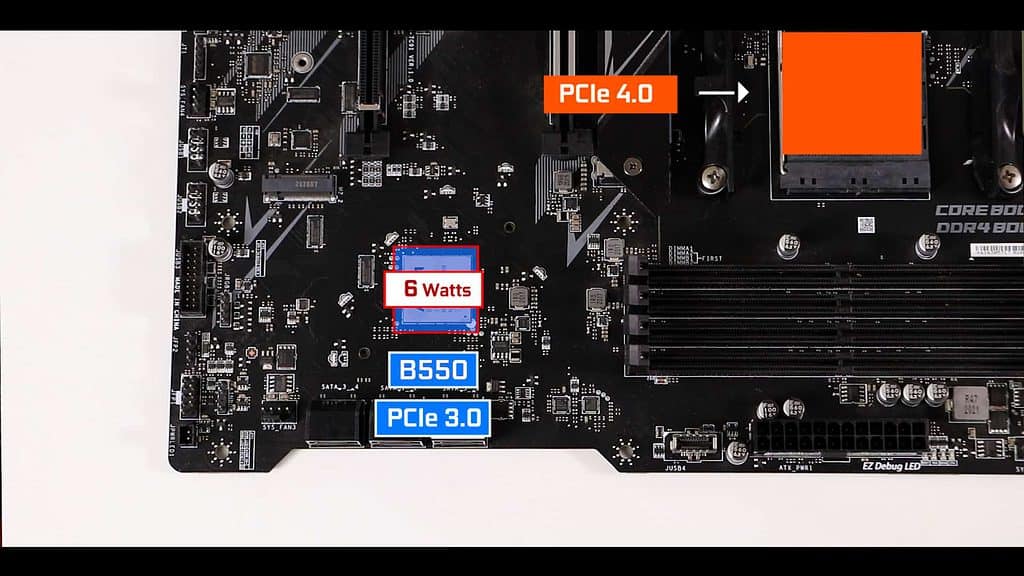 On one hand it keeps our Chipset cold enough not to require an active cooling solution as seen on the boiling 11 watts X570 chipset, and on the other, the motherboard still benefits from the PCIe 4.0 standard brought in by its CPU. The MPG B550 GAMING EDGE WiFi has 4 PCI expresses slots.:

Only the closest one to your CPU can deliver up to 16 full bus speed meaning, this is where you’d want your video card to be placed for optimal performances, hence the metal re-enforcement.

The second naked one has been capped at only x4 PCIe 3.0 lanes. Not exactly suitable to extract the best performances from your video card, but fully expected at this price range. 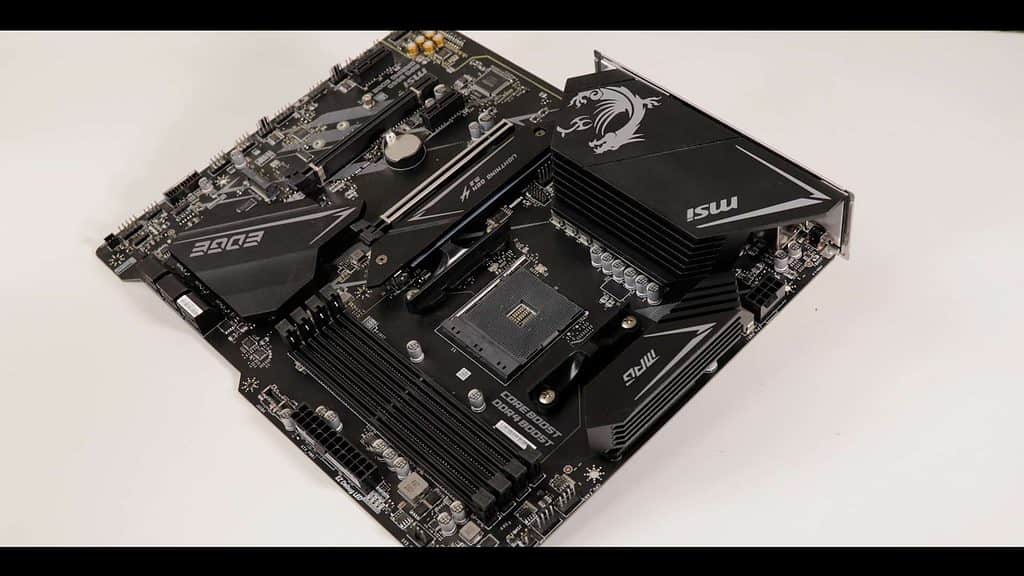 So a good board for a single GPU configuration, even though it can support a dual AMD card configuration (CROSSFIRE). We have 8 nested PWM FAN connectors, 1 of which can support a water pump (AIO or dedicated)

Definitely what you want to see on an enthusiast driven board. The MPG B550 GAMING EDGE can handle about any cooling solutions you will throw at it. Spanning from the classic air to the eccentric dual-loop custom water cooling apparatus. The EZ debugger will give us a first-aid troubleshooting guidance one what stage of the boot your system failed. All of which can obviously be synced though MSI proprietary Mystic software.

At 190 USD (MSRP at launch), the MSI MPG B550 Gaming Edge WiFi is the proof that when MSI puts its mind onto something, it can deliver.

It shows a real improvement coming from its hot mess of a sibling the X570 Gaming Edge.
The VRM is both powerful and heat efficient, the very point were its X570 so miserably failed!
It is feature rich and delivers a solid foundation for a long lasting product, and it does deliver beyond its price range! For sure! The only difference, is the WiFi add-on. For the rest, both motherboards are near replicas. They look different, but they are in essence the very same board.
It is a pure product cannibalism, and good example of big companies trying to milk the same product with some rebranding, and not taking too many risks! I find it even a little lazy.

And MSI should really rethink their approach here, and maybe propose less boards with more distinct qualities.
This said, the B550 GAMING EDGE is an excellent board just like the  B550 TOMAHAWK is, and my advice, to you would be, get the one who looks best for you, or is available or comes at a cheaper price tag.

Because that’s the only difference you will have between them two.

It shows a real improvement coming from its hot mess of a sibling the X570 Gaming Edge. The VRM is both powerful and heat efficient, the very point were its X570 so miserably failed! It is feature rich and delivers a solid foundation for a long lasting product, and it does deliver beyond its price range! For sure!