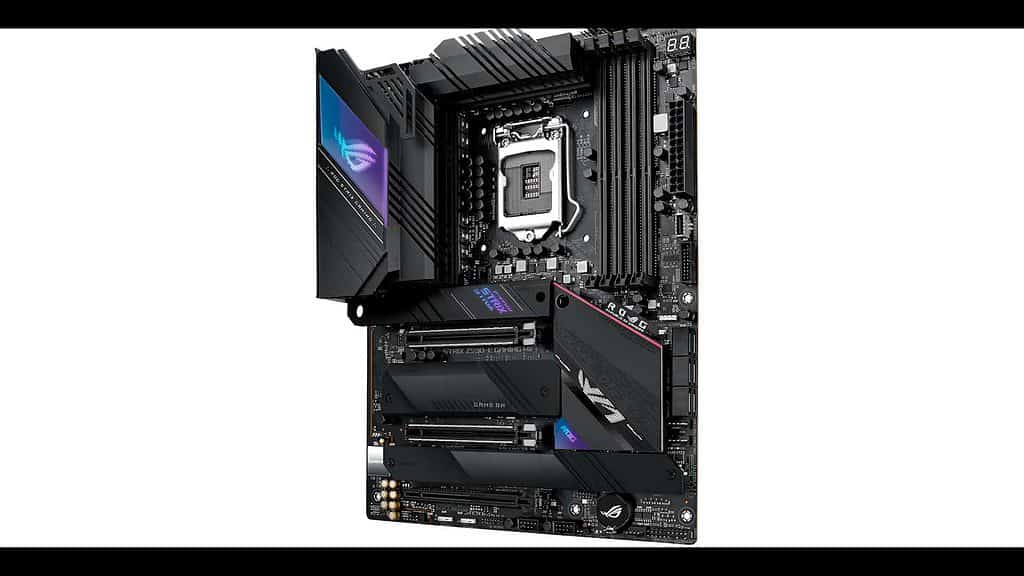 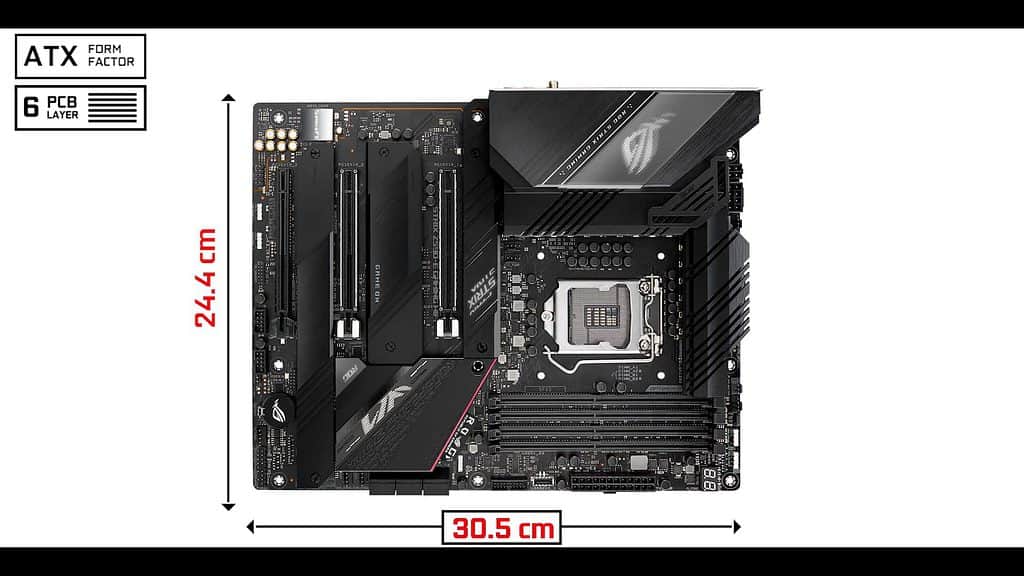 We are dealing with a 6 layered PCB ATX motherboard. Totally expected from a PCIe 4.0 enabled motherboard. Having more PCB layers (typically only 4) adds PCIe signal isolation which will allow a stable PCIe 4.0 support. 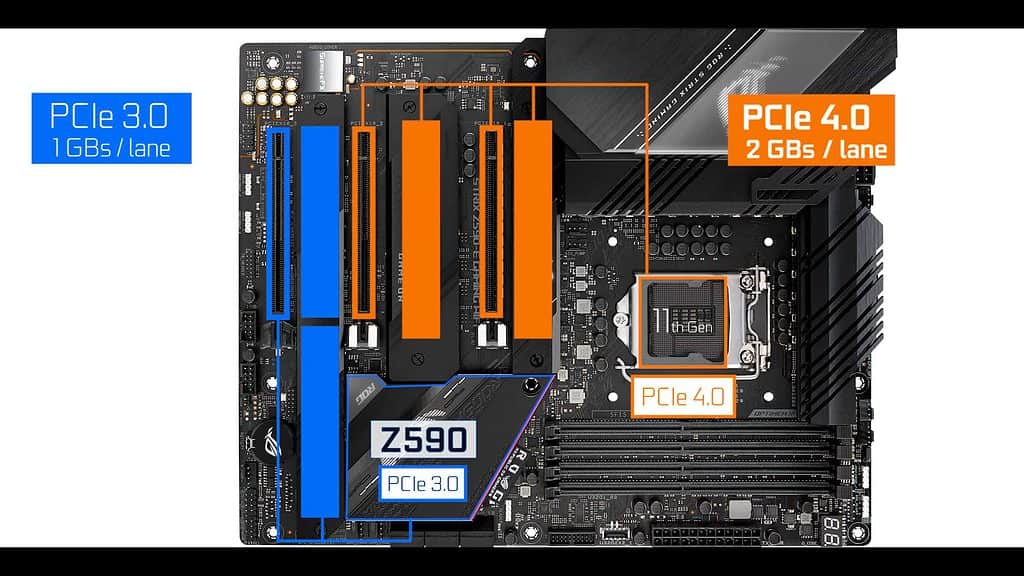 Worth noting only the incoming 11th gen Intel CORE CPU is PCIe 4.0 enabled which has its importance since it will feed our several components with double the bandwidth the PCIe 3.0 can.

The chipset fed components will remain PCIe 3.0 only compliant in any cases. 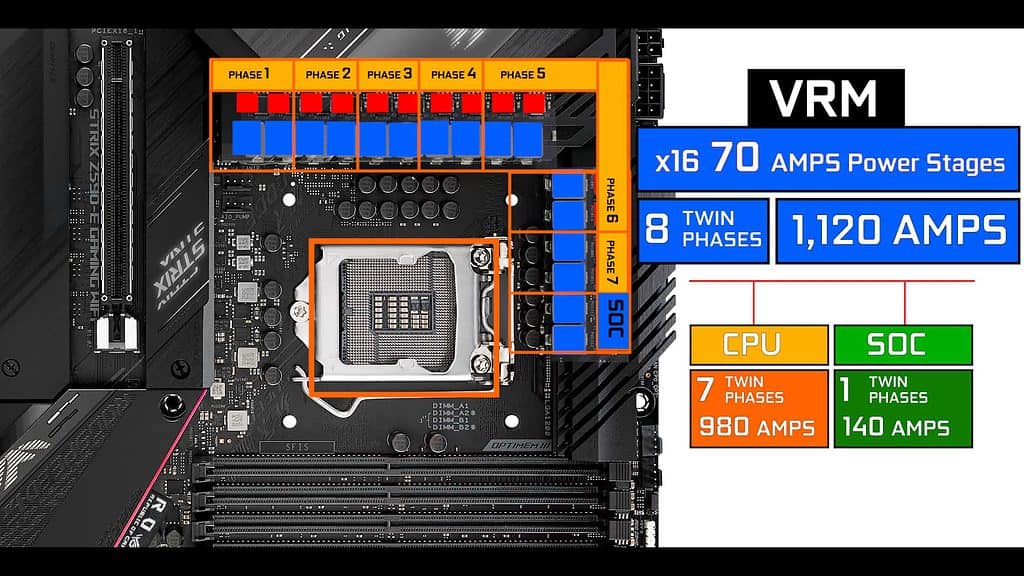 It has nothing to do with its predecessors, and truly is an unprecedent leap forward.
We have 16 70 AMPS Powers stages for a total of 1120 AMPS organized in 8 twin phases, 7 of which are CPU centric.

Some of you might rightfully ask: Why would we have 1120 amps worth of power to run up-to a 8 core CPU?
The short answer is marketing and thermals.

Obviously half that would have been enough to run and even overclock any of the 10th or 11th gen Intel CORE CPU, but using a fraction of a 70 AMPS power stages doesn’t heat as much as a maxed-out 40 amps power stage. The overall power draw is shared amongst 14 power stages, in effect spreading the heat all around. This should give us one of the most powerful and coolest VRM seen on a STRIX series to date! 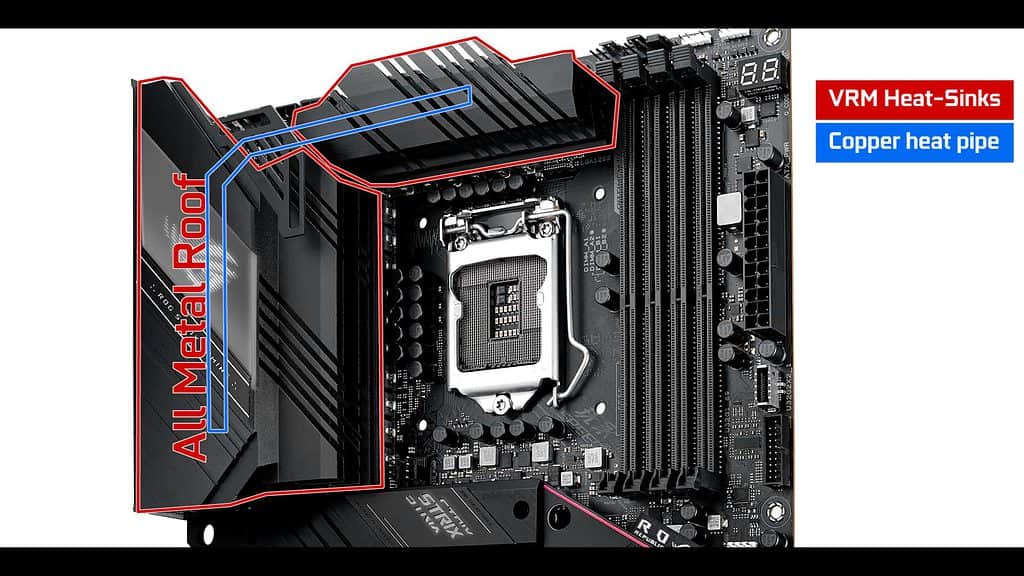 We have massive 2 stages, copper pipe linked heat-sink which should do a rather good job at radiating that massive VRM heat away.

The 1st stage is this imposing all metal piece of metal with an all-metallic IO roof. I first saw this feature on MSI’s X570 UNIFY motherboard, but absolutely love to see it bleed out in the industry.

In all and for all, I do expect this VRM temps to be well within thermo-throttling bounds with peaks at around 65C (PCB), on a copiously over-clocked i9-11900K.

The ROG STRIX Z590-E Gaming can support up to 128 GB of DDR4 ram in a dual channel configuration. 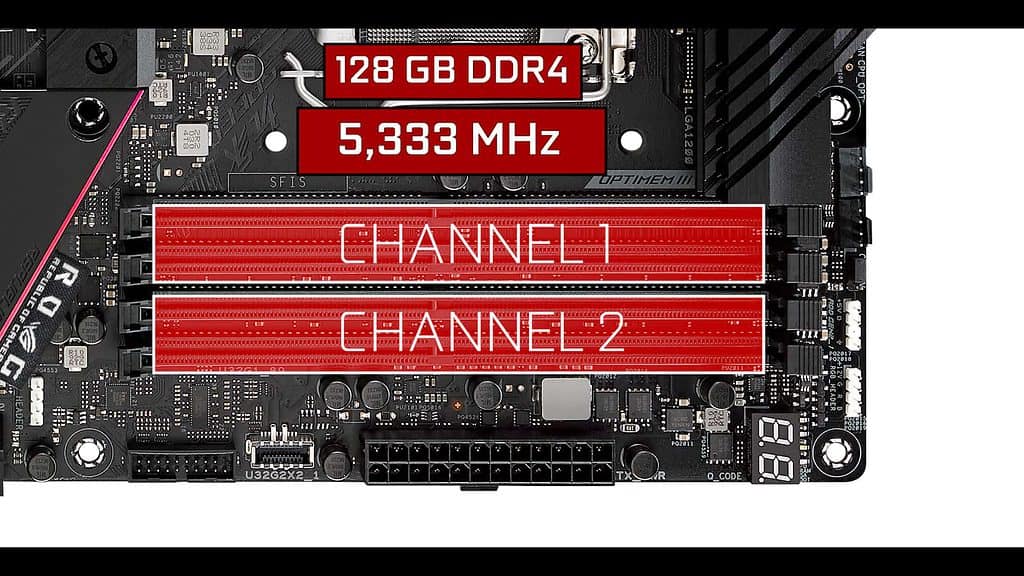 It is overclockable up to a novel 5,333 GHz ( in a single DIMM configuration ) which is noticeably more than its Z490 predecessor (533 MHz more).

Our board can support up-to 4 M.2 SSD, which is obviously unprecedented for a STRIX board. But there is a catch! 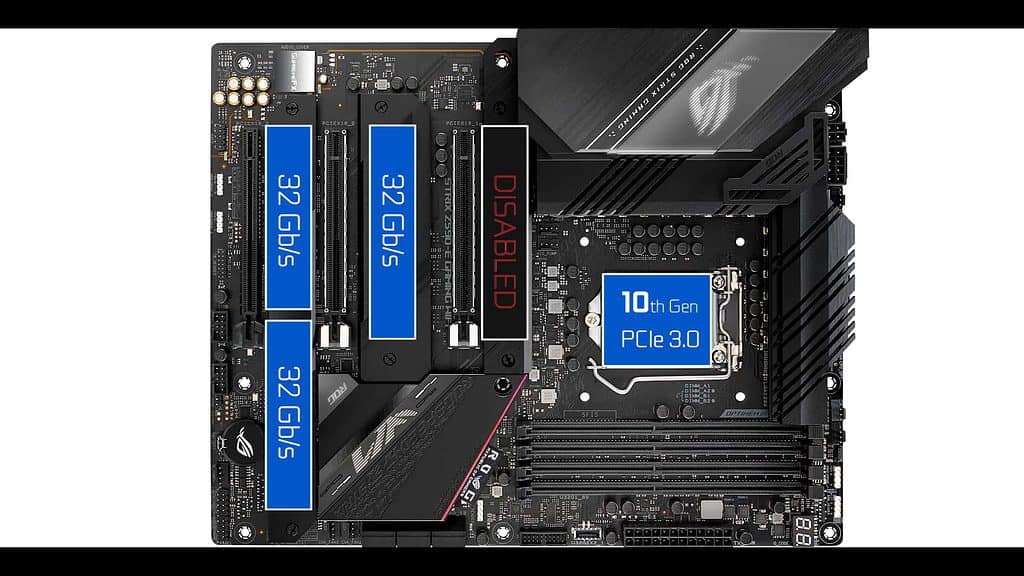 Couple this board with a 10th Gen Intel CORE CPU, and ‘only’ three M.2 SSD connectors will be usable, at PCIe 3.0 standard, meaning up to 32 Gbs each. 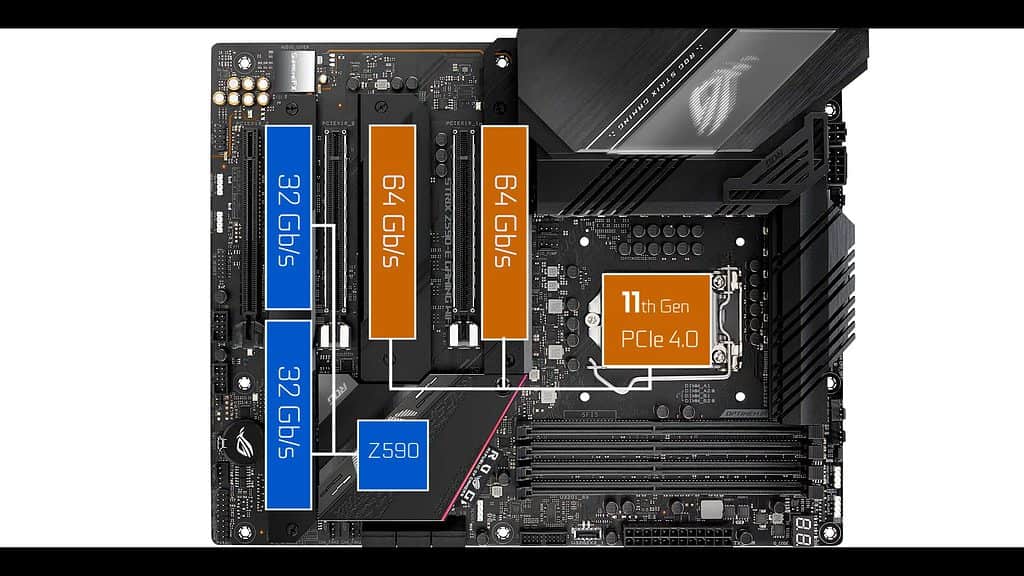 But if coupled with a 11th GEN Intel CORE CPU, your board can now support up-to 4 M.2 SSDs, 2 of which can transfer data at PCIe 4.0 bandwidth levels, meaning up to a whooping 64 Gbs.

Obviously this will produce quite a bit of heat. 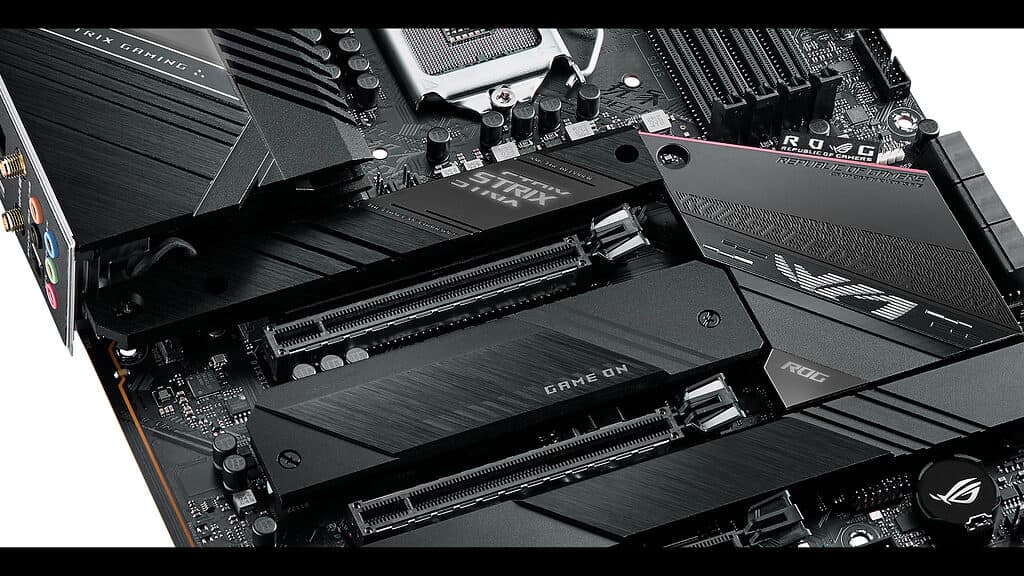 I will note that the last 2 M.2 SSDs so share a common (very) long heat sink. I do have reserves on how fast that plate can radiate heat away, and shall definitely take a closer look at tit once I get a chance to play around with this board.

Despite many early reports, the Z590 Chipset does not house any PCIe 4.0 lanes. Instead it has the same 24 PCIe 3.0 lanes as seen on its Z490 predecessor.
In addition it can redirect the 11th Gen Intel CORE CPU 20 PCIe 4.0 lanes to some of the board components ( on this board, a PCIe 16 export slot and M.2 SSD connector). Is it a bad thing? Not necessarily.

On one hand it keeps our chipset cold enough not to require an active cooling solution as seen on the boiling 11 watts X570 chipset, and on the other, the motherboard still benefits from the PCIe 4.0 standard brought in by its CPU. 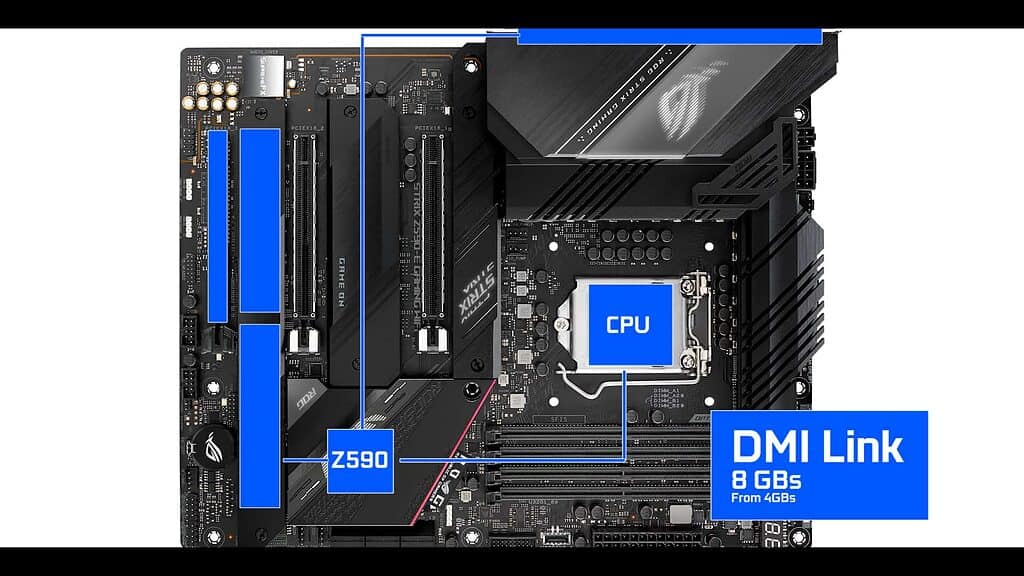 The most noticeable upgrades are :

In a dual GPU configuration, lanes are split in a 8 by 8 PCIe lane configuration. Hence the metallic reinforcements.

Note that this board is both SLI (x2) and CROSSFIRE (x2) compatible.

Our last and naked 16 slots is capped at 4 PCIe lanes, not exactly GPU friendly. Coupled with a 10th Gen Intel CORE CPU, all of our PCIe slot will output bandwidth at a 1 GBs rate. But if coupled with a 11th Gen. Intel CORE CPU, our 2 first PCIe 16 slots can output PCIe 4.0 bandwidth levels meaning 2 GB/s per lane.

Worth noting that, with the current bandwidth outputs of AMD or Nvidia graphics cards, there are no performance gains between PCIe 3 or PCIe 4 standards.
It is great for future proofing (and marketing), but that’s about it . Note the presence of the new THUNDERBOLT 4.0 connector, allowing up to 40 Gbps transfer (same as in Thunderbolt 3.0) and energy output upto 60Watts (new). 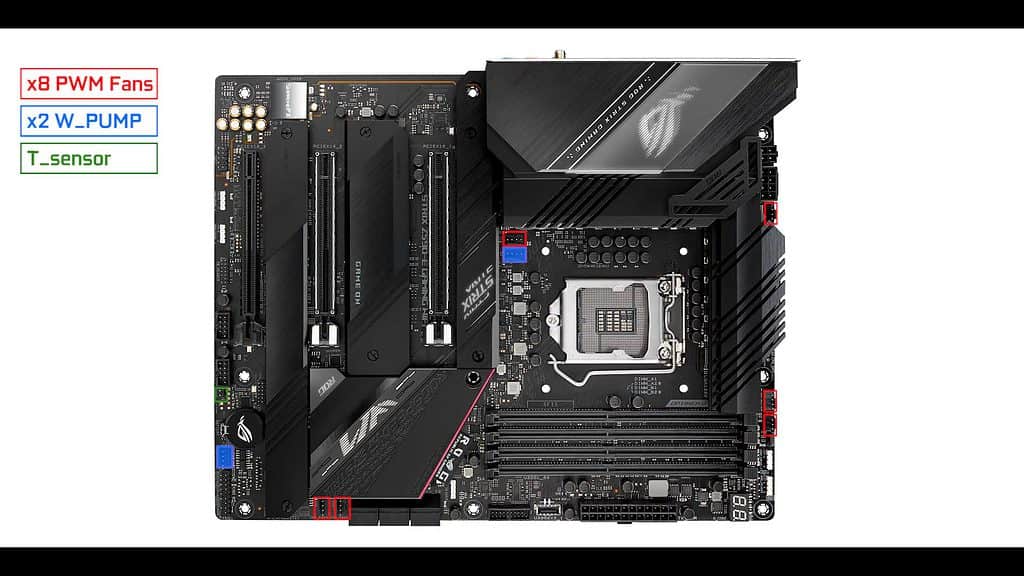 We have 8 nested PWM FAN connectors, 2 of which can support a water pump (AIO or dedicated)

Definitely what you want to see on an enthusiast driven board. The ROG STRIX Z590 -E Gaming can handle about any cooling solutions you will throw at it. Spanning from the classic air to the eccentric dual-loop custom water cooling apparatus. The EZ debugger is really the a crucial must-have on PCIe 4.0 enabled boards. More often than not, enthusiasts can’t resist the call to find their RAM or CPU overclocking limits, and fail boots becomes a daily incidence.

It is further refined by a precise Q-LED error which will pin-point any current software or hardware problems. One under our IO roof.

one under our first m.2 SSD heat-shield and a final one on the corner of our chipset heatsink

In addition we also have 5 RGB connectors : It is the first tie i see that many RGB connectors and I do not think it was necessary, especially when that fifth connector is places right on the main video-card pathway!

All of the above are obviously fully customizable (and sync-able) though ASUS proprietary AURA software or ARMOURY Crate.

The ROG STRIX Z590-E GAMING WiFi will run you around 380 USD (MSRP). About 80 dollars more than its previous iteration.

Usually, intel boards see limited improvements and upgrades generation-to-generation, and if you watched any of my Zxxx powered boards reviews, you know that I usually advice against a gen-to-gen upgrade.

But the ROG STRIX Z590-E Gaming brings quite a lot when compared to its previous Z490 iteration.

More importantly, some of the new features makes it interesting not only to enthusiast builders and heavy gamers, but even to content creators.

That 2nd 2.5 Gbs lan, this many M.2 SSD connectors, theses DUAL type-C outputs, definitely makes the ROG STRIX Z590-E Gaming an easy board to expand and work with.

Truth is I am really excited by what I saw here, and compared to its Z490 variant, I can definitely see a solid argument for an upgrade.

ASUS ROG STRIX Z590-E GAMING WIFI is the biggest leap forward I have seen on generation to another. 70 AMPS power-stages, WIFi 6E, the list goes on!