Once in a blue moon, a stale industry produces a refreshing dish. And that’s what AMD has done with its latest G series Ryzen CPUs line-up. And I say stale simply because the all CPU / GPU market is confused.

Let me start by saying that I had my share of  graphic “enhanced” CPU since 1995 ( yes, that’s ninety with a 9), starting with MMX (which is still around if you look deep at your CPU specs), MMX2 and different HD, UHD and what-have-you-HD integrated APU housed in our modern Intel-based processors.

Even though they did bring, with ranging success, bring a minimal and operational performance to your day-to-day computing, none of them could possibly compare and compete against even the most basic discrete video card of its time.

And for some good reasons. GPUs (or discreet video cards) are fully equipped computers in their own rights! They have specialized GPUs supported by high-performance DDR memory which are usually 1 or 2 generations ahead from what your CPU can support (we had DDR5 equipped memory cards when DDR3 compatible CPU just got released), and the whole, soldered directly onto a dedicated logic-board.

Why is it so important?

And all was good and all was well until crypto-miners came along of course. Theses little piece of dedicated hardware is not only good at shooting monsters it came up. They are also awesome in solving complex algorithm (or mining) unlocking rewards in the form of hard cold crypto-cash.

In the matter of an operational year (that’s about 8 months in the GPU world), crypto-miners savaged the gamers industry, buying literally all the video cards available to them. A little bit of offer and demand magic, and we are now left with overpriced cards, available on parallel markets (E-bay, Amazon,…) at incredible prices. A Radeon RX Vega 64, which was released at about 500 USD, is now sold (when found) at about 1950 USD.

We can say a lot about AMD, but one thing they have been excelling at lately is to identify opportunities, and evolve their MASSIVE factory processes to answer them. And so they did with the ZEN architecture, kicking Intel’s butt all the way to the moon (and back), and doing the same to Nvidia with their Vega 10 architecture. And that was of course, unprecedented and a monument to AMD technological know-how and marketing ingenuity.

Of course, a company which had successfully re-defined both the CPU and GPU market was in the unique position to experiment and Frankenstein its way onto a unique product which would answer to the most pressing demands in the market.

The G series Zen based CPU’s

Does it deliver? In a nutshell… YES!

Let me be clear, there are drawbacks and limitations, but indeed it does deliver what was expected of it to deliver: a real gaming experience without a dedicated video card.

Of course, this is a broad statement, and games are different both in a graphics engine and in AMD compatibility. But the simple fact that I did need to install the AMD Adrenalin software pointed out that there were real GPU cores hidden under our CPU die. Exciting!

I did launch Fallout 4, which is both a wide spectrum game, including smaller and larger game area and most importantly, all the shading and 3D rendering necessary to ranks any charlatan claims.

At medium graphics setting, the Ryzen 2400G performed almost as well as a Geforce 1030 GTX !!! 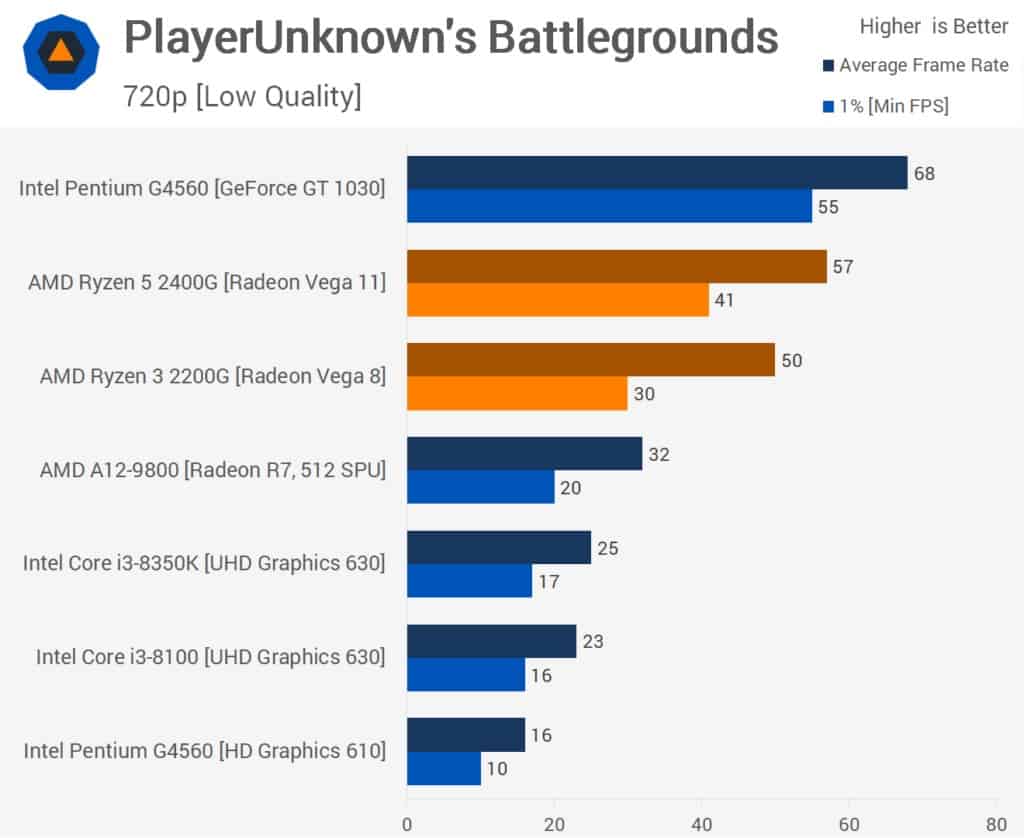 Which, in itself, is quite a leap forward.

Worth noting that the RAM’s clock will play a major role in how the Vega cores will behave. Since they come RAM “orphaned”, they will rely entirely on whatever is being shared by the motherboard. And is in graphics intensive tasks, the RAM will play a key role in delivering a higher frame rate.

All right… enough said. Off you go and good gaming!

First of its kind, the Ryzen 5 2400G answers with some success to the GPU crisis the tech market has been facing for the past year. But more than that, it gives us a glimpse of what the future holds!